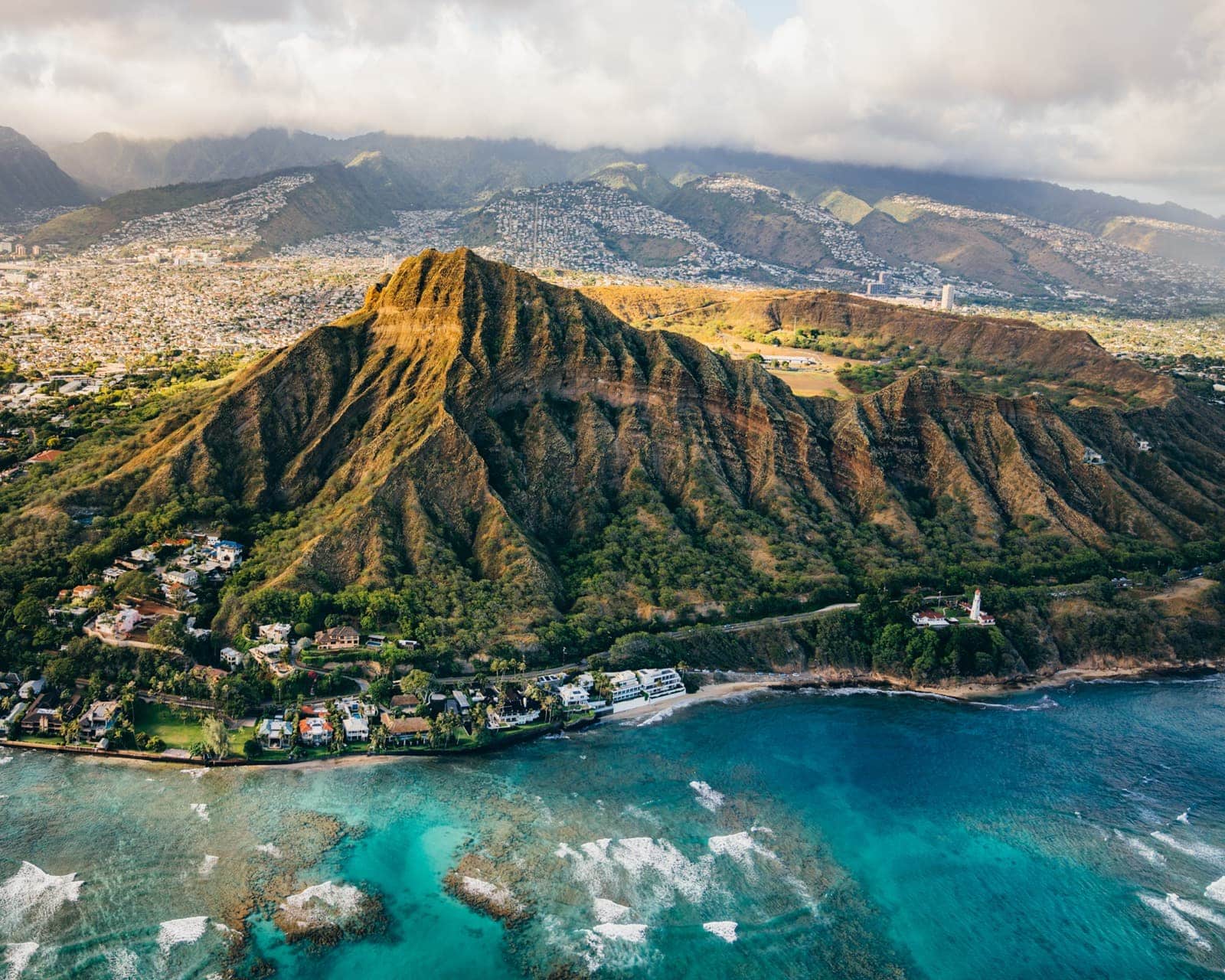 Diamond Head, or Lē‘ahi as Native Hawaiians call it, is the most iconic volcanic formation in all of Hawai‘i. Soaring high above Waikīkī, it serves as a backdrop to Honolulu’s skyline, and has forever graced postcards and pictures from the Aloha State. Even if you’ve never been to Hawai‘i, you most certainly have laid eyes on Diamond Head.

For visitors, hiking to its summit is one of the most popular activities on O‘ahu. Each day, thousands of people make their way to the top for a bird’s eye view of Honolulu and the southern shoreline. Still, despite its popularity, there’s still a lot that goes unsaid about Diamond Head, including a complex history that mixes traditional Hawaiian ceremonies, military occupation, and even an infamous concert series.

The history of Diamond Head is multi-tiered and rich, and understanding its past will help you enjoy your visit in the present.

A Cultural Site for Hawaiians

Known to Native Hawaiians as Lē‘ahi, Diamond Head was a site of reverence and worship. In the earliest accounts of Western visitation to Hawai‘i, eyewitnesses describe seeing religious ceremonies take place upon its slopes, including animal and human sacrifice.

The name, Lē‘ahi, translates to “forehead [of the] ahi [fish].” Hawaiians named things very practically, typically after their appearance or makeup. The modern-day “Diamond Head” name comes from when early Western explorers and traders in the late 1700s mistook the crater’s calcite crystals for diamonds.

In 1895, after the overthrow of the Hawaiian monarchy in 1893, a bloody battle between royalist rebels and the provincial government was fought on the slopes of Diamond Head.

In 1904, Diamond Head was purchased by the U.S. government and turned into a military base. Tunnels were carved into the crater, batteries were built, and bunkers were installed. The trail to the summit was built in 1908 as part of the island’s coastal defense system, allowing soldiers to reach the various lookouts and bunkers. The U.S. military maintained control of Diamond Head until 1955, when it transferred control to the then Territory of Hawai‘i (remember, Hawai‘i didn’t become a state until 1959).

Throughout the late 50s and the early 60s, Diamond Head’s future was in doubt. Developers drooled over its real estate potential as local residents fought to maintain its integrity. Ideas included residential buildings, high-rise hotels, and even a tramway to the top of the crater, but eventually, thanks to the hard work of many activists, preservation won out. In 1962, the Diamond Head State Monument was first established, and in 1965, the state legislature preserved parts of Diamond Head as a historic site. In 1975, Diamond Head came under daily management of the State’s Park Division, and thereafter, public access was made a priority.

One other fun fact: In the late 60s and 70s, when visitation was possible by special-permit only, a radio station was given permission to host a concert series inside the crater, putting on a Woodstock-esk festival that included acts such as Carlos Santana and Buddy Miles. The concert series ran until the late 70s, when they were discontinued (for a variety of reasons, including safety). They were later repeated in 2006 and 2007, when Earth, Wind and Fire, Linda Ronstadt, Mick Fleetwood, the Steve Miller Band, and others performed.

You can read more about the concerts here. Those interested in a deeper dive into Diamond Head’s history should consider reading “Secrets of Diamond Head: A History and Trail Guide” by local author Denby Fawcett.

Each day, thousands of people make their way to the top for a bird’s eye view of Honolulu and the southern shoreline, making it a favorite hike both for locals and for visitors.

Good to know: Upon arriving at the Diamond Head Crater, out-of-state visitors are subject to an entry fee. It’s $10 per vehicle if you park inside the crater (see below for parking information), or $5 per person if you walk in or arrive via bus/taxi/trolley/ride share.

The Diamond Head Summit Trail is 1.6 miles roundtrip, climbing 560 vertical feet from the crater floor to the overlook. While it’s less than a mile to the top, the elevation gain can be challenging for some, especially on hot days. But don’t let that discourage you. The path to the summit is paved the entire way, and the steepest portions have stairs, which make climbing straightforward and safe. There are also benches and lookouts along the way where you can rest. The average person will take about 45 minutes to reach the top, and about 30 minutes to descend back down.

For those interested in the history of the crater, we recommend the self-guided audio tour available from the Visitor Center. This tour highlights much of the historical, geological, and ecological significance of Diamond Head, and only costs a reasonable $4.

The Diamond Head hike is the most popular hike on the island of O‘ahu. This should be factored into your expectations – you certainly will not have the trail to yourself. That said, here are some tips to make your visit more enjoyable:

See the following video to get an impression of what the hike to Diamond Head is like:

Practicalities: making reservations and how to get to the Diamond Head State Park

Read below to find out how to best get to Diamond head, if you should make a reservation, and what the park entry fee now is.

As of May 12th, 2022 all out-of-state visitors must have an advanced reservation to enter Diamond Head State Monument. The reservation system will activate on April 28th, 2022 allowing for reservations to be made 14 days in advance. Hawaiʻi residents continue to enjoy free access without reservations.
tip

Should you make a reservation?

If your do not have a Hawai‘i State Driver’s License or ID – yes.

Beginning May 12, individuals without a Hawai‘i State Driver’s License or ID must have advance reservations to enter the park. Hawai‘i residents will continue to enjoy free access to the park without reservations, but entry may depend on parking availability.

Reservations can be made online at the state park website (starting April 28th). Visitors parking vehicles in the crater will be required to book in two-hour time slots beginning at 6 a.m. (two consecutive slots can be booked). Walk-in and drop-off visitors will be subject to one-hour entry time slots.

Our take: while making a reservation makes visiting Diamond Head less easy it does help to manage crowds. visitors will directly benefit from this by being able to enjoy a less-crowded trail.

All non-Hawai‘i resident visitors to Diamond Head State Monument will be required to purchase both Entrance and Parking unless arriving on-foot. For example, if there are two (2) passengers in your one (1) vehicle, you will need to purchase two (2) entry tickets and 1 (one) parking.

Getting to Diamond Head (with and without car)

Diamond Head is accessible by the following:

Things to do close to Diamond Head

Diamond Head State Monument is close to the Honolulu Zoo, the Waikīkī Aquarium, and Queen Kapiolani Park. If you’re traveling to Diamond Head from outside Waikīkī, it might make sense to combine the hike with a visit to one of these other attractions (those staying in Waikīkī could also combine visits, but it’s less necessary given the proximity).

After the hike, consider cooling off with a visit to Diamond Head Beach Park. It is not connected with the Diamond Head Crater, although you can look down on it from the top of the summit trail. The beach is narrow and fronted by a rocky shelf, and while swimming conditions are typically poor, it is reasonable for a quick dip. It’s also a great place to watch surfers.

If you’re looking for a bite to eat after the hike, check out Rainbow Drive-In or Ono Seafood on Kapahulu Avenue for a local plate lunches and poke. Both have great neighborhood-feels with laid-back, outdoor patio seating.